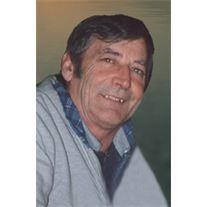 Donald Bentz, 67, Mandan, died December 18, 2013 at his home after a valiant battle with MS and bile duct cancer. His devoted family was by his side.
A funeral service will be held at 10:30 am on Saturday, December 21 at First Lutheran Church, 408 9th Street NW, Mandan, with Reverend Lee Herberg officiating. Burial will be at Mandan Union Cemetery.
Visitation will be held from 5 to 7 pm on Friday, December 20 at First Lutheran Church with a prayer service at 7 pm. Visitation will continue one hour prior to the service at the church on Saturday.
Donald was born April 4, 1946 in Carson to George and Bertha (Kraenzel) Bentz. He attended Heil Grade School and graduated from Elgin High School in 1965. Donald worked at Kopp Standard in Bismarck. In 1969 he met Paulette Heyne and on June 20, 1970 they were married at First Lutheran Church in Mandan. They made their home in Mandan. Donald owned East Main Standard for a year and a half in the late 70’s. He then worked as a service writer at Raymond Ford which later became Bill Barth Ford. He retired in 2008 after 25 years. He went on to work at L & H Manufacturing and drove for Carquest and Cedric Theel. In his free time Donald enjoyed riding horse, playing horseshoes, bowling, softball, camping, and was an avid Green Bay Packers fan. A man of few words, Donald will be remembered by those who knew and loved him.
Blessed to have shared his life is his wife of 43 years, Paulette Bentz, Mandan; two sons, Michael (Lana) Bentz and David (Katie) Bentz, all of Mandan; two grandchildren, Kaylee and Bradyn Bentz; three sisters, Frieda Roth, Bismarck, Arlene (Vernon) Dietz, Bismarck, and Delores Tache, Great Falls, MT; two brothers, Harold Bentz, Bismarck and Arnold (Carole) Bentz, Menoken; and numerous nieces, nephews, and friends.
Donald was preceded in death by his parents; brothers, Edward and Gerald; father and mother-in-law, Arthur and Helen Heyne; brother-in-laws, Vernon Roth, Raymond Rennich, George Rennich; and niece Paula Rath.
To order memorial trees or send flowers to the family in memory of Donald Bentz, please visit our flower store.