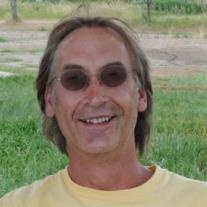 Funeral services for Dan Patrick Henderscheid, 55, will be held at 11:00 am Wednesday, December 3, 2014, at the Buehler Larson Funeral Home in Mandan, North Dakota with full military honors. Pastor Phil Lint will be officiating. Interment will be held at the Bagnell Cemetery, which is located at the Cross Ranch Nature Conservancy in the Hensler- Sanger area, Oliver County, North Dakota.

Dan Henderscheid passed away Sunday, November 23, 2014 at his home in Wheatland.
Dan was born August 18, 1959 in Hazen, North Dakota, the son of Budd and Shirley (Cleveland) Henderscheid. Dan was raised and educated in Oliver County, North Dakota and graduated from Center High School in Center, North Dakota in 1978. He was proud to serve in the United States Marine Corps following graduation. He was a shooting instructor in the Marines. He moved to Wheatland in 1981 and started working for Missouri Basin Power Plant - Laramie Station. Dan worked there for 33 years, starting at the bottom and working his way up to Control Room Operator, the position he was holding at the time of his death.

He married Danette Donovan and they raised 4 children, Elizabeth, Katie, Lee, and Charlie. He enjoyed hiking, hunting, fishing, and nature. He was very proud that his children have all become hunters. He had a passion for photography and loved taking pictures of nature. He was a great artist in unique areas, working with hides, leather, and animals. He did many things with wood carving. He was an avid reader and could captivate us all with his story telling. He loved to cook and share his knowledge on recipes. Dan was a hard worker and was happiest when he was doing something for someone else. Dan was a generous man and had a heart of gold.

He was preceded in death by his parents, Budd Henderscheid and Shirley Jacobson; daughter, Katie Alice Henderscheid, his twin sister, Candance Hertik; and infant brother, Lee Henderscheid.
To order memorial trees or send flowers to the family in memory of Dan Henderscheid, please visit our flower store.