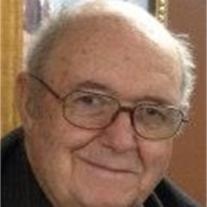 Clifford Harold Williams, age 80, Bismarck, passed away from congestive heart failure at his daughter’s home, northeast of Bismarck, on August 5, 2016 surrounded by his family.

A funeral service will be held at 10:30 am on Wednesday, August 10, 2016 at Grace Lutheran Brethren Church, 2400 East Avenue A, Bismarck, ND. Burial will be at Sunset Memorial Gardens, Bismarck.

Visitation will be held from 4 to 7 pm on Tuesday, August 9, 2016 at Grace Lutheran Brethren Church, Bismarck, and continue one hour prior to the service at the church on Wednesday.

Clifford was born to Harold and Laurine (Monroe) Williams on March 27, 1936 in Bismarck. He served in the US Army from 1956 to 1958 and was stationed in Germany where he completed his GED. On July 23, 1960 he married Ardith June Franklund at Zion Lutheran Church in Bismarck. Clifford worked for the ND State Prison system for over 20 years, holding the position of State Prison Farm Manager for 13 years. He was recognized for many achievements while working in this role. After retirement, he drove and repaired charter and school buses for Harlow’s which allowed him to tour the country and visit with people, which he greatly enjoyed. His family was his top priority in all he did. He enjoyed taking the family fishing, camping, hiking, visiting friends and extended family, and traveling. He also enjoyed fixing things and you would often find him fiddling with something that needed attention.

Clifford is survived by his wife, Ardith; his son and daughter and their spouses, Tim and Laura (Hegg) Williams and Dawn and Karsten Anderson; 8 grandchildren; sisters, June Brown and Darlene Feist; and 15 nieces and nephews.

Donations or flowers can be sent to Grace Lutheran Brethren Church at 2400 East Avenue A, Bismarck, ND.
To order memorial trees or send flowers to the family in memory of Clifford Williams, please visit our flower store.