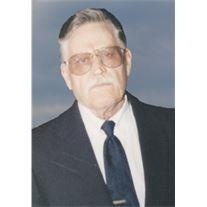 Clarence Bauer, 88, Mandan, died February 15, 2013 at Kindred Hospital, Mandan.
A funeral service will be held at 1:00 pm on Tuesday, February 19, 2013 at Buehler-Larson Funeral Home, Mandan, with Reverend Lee Herberg officiating. Burial will be at Mandan Union Cemetery with full military honors. Visitation will be held one hour prior to the service on Tuesday.
Clarence was born November 13, 1924 in Carson to August and Olive (Brantner) Bauer. Raised and educated in Mandan, he enlisted in the Civilian Conservation Corps in 1941, the California State Guard in 1942, and the US Army in June 1943. Clarence spent two years in South Pacific Theater with the 37th Infantry Division. He was wounded in Manila and received the Purple Heart and the Combat Infantryman Badge. Honorably discharged in December 1945, he re-enlisted in 1947 and was later discharged at Fort Bliss, TX in 1950. On July 3, 1950 he married Regina Friesz of Center. They made their home in the Mandan where he worked for Northern Pacific Railroad and in construction. Clarence was a lifetime member of the VFW, American Legion, and Disabled American Veterans.
Clarence is survived by six children, Douglas (Florence) Bauer, Mandan, Donna (Douglas) Wetzel, Bismarck, David Bauer, Huff, Diana Halverson, Darrell Bauer, and Dean Bauer, all of Mandan; 10 grandchildren, 2 great grandchildren; and a sister-in-law, Jackie Bauer, Belfair, WA.
Clarence was preceded in death by his wife in 1991; his parents; and brother, Harvey.
To order memorial trees or send flowers to the family in memory of Clarence Bauer, please visit our flower store.