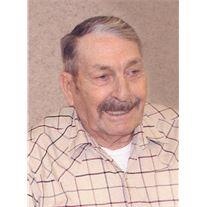 Chester J. Kramer, 80, died May 19, 2012 in New Salem due to complications of lung disease.
A funeral service will be held at 10:00 am on Tuesday, May 22, 2012 at Peace Church, New Salem, with Reverend Joshua Eddy officiating. Burial will be at 1:00 pm on Wednesday, May 23, 2012 at the North Dakota Veterans Cemetery with full military honors.
Visitation will be held from 3 to 8 pm on Monday, May 21, 2012 at the Buehler-Larson Funeral Chapel, New Salem, and continue one hour prior to the service at the church on Tuesday.
Chester was born May 6, 1932 to John and Morna (Hohbein) Kramer on the family farm where he was raised, northwest of New Salem, near the Blue Grass area. He was baptized and confirmed at Peace Church in New Salem and remained a lifelong member. Chester helped his dad farm until he started work at age 20 in small coal mines around the New Salem area. In 1954 Chester was drafted into the US Army. He completed boot camp at Fort Leonardwood, MO and was stationed in Germany. He attained the rank of Spc. 4th Class and received the Army Occupation of Germany Award, the Good Conduct Medal, and was honorably discharged on August 18, 1956. Chester was a member of the American Legion Post 91. Returning home to New Salem, he worked in the mines again until 1969. At that time he began working for Rolin Manufacturing where he retired as foreman in 1999 after 30 years. During those years, Chester continued to farm his family farm as well. In 1972 Chester met his future wife, Marion LeMay, and they were married on March 5, 1973. He became an instant father to her six children. During his 80 years, Chester and Marion made several trips to Southern Illinois and Washington state. He will be remembered for his complete dedication to Marion and his willingness to always help others.
Blessed to have shared his life is his wife of 39 years, Marion Kramer, New Salem; six step-children, Sandra (Donald) Snoddy, Marion, IL, Sherry (Keith) Keator, Bismarck, Judi (John) Carlson, Kennewick, WA, Ted (Mary) LeMay, Glen Ullin, Donald (Sherry) LeMay, Almont, and Riley (Cindy) LeMay, Bismarck; 16 grandchildren; 12 great grandchildren; and 1 great great granddaughter; one nephew, Kenny (Mariann) Brandt, Center; two nieces, Rhonda Heid, Mandan and Roberta (Keith) Hoesel, New Salem; and numerous grand nieces and nephews.
Chester was preceded in death by his parents; two sisters, Dorothy Hoeverman and Marlene Brandt; and three nephews.
To order memorial trees or send flowers to the family in memory of Chester Kramer, please visit our flower store.