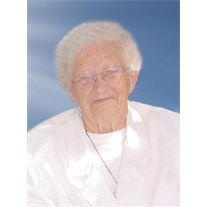 Charlotte Henke, 88, died December 29, 2012 at Elm Crest Manor, New Salem.
A funeral service will be held at 10:00 am on Friday, January 4, 2013 at St. Peter’s Lutheran Church, Hannover, with Reverend Russell Fitch officiating. Burial will be at Hannover Cemetery.
Visitation will be held from 1 to 2 pm on Thursday, January 3, 2013 at Elm Crest Manor, New Salem, and from 4 to 7 pm at St. Peter’s Church in Hannover. Visitation will continue one hour prior to the service at the church on Friday.
Charlotte was born May 7, 1924 to Fritz and Alma (Schmeling) Kuch. She was raised on the family farm near Churchtown for most of her young life and attended school in Church District, graduating in 1942 from Center Public School. In 1943 Charlotte met Nelvin Henke and 2 years later, on November 21, 1945 they were married in Churchtown, ND. They purchased a farm south of Hannover where they lived for 7 years and had their 3 children, Paulette, Dwight, and David. From there they moved to their present day location, the family farm NW of Hannover.
Charlotte enjoyed her work with the public, working at the Center Law Office full time for 36 years and part time until she was 85. She also served 2 terms on the Center School Board and still continued to attend meetings. A volunteer for several local organizations, Charlotte spent many hours volunteering as treasurer for the American Red Cross, American Cancer Society, and the Oliver County Historical Society.
Charlotte was a member of St. Peters Lutheran Church in Hannover where she was a member of LWML for many years and also a Sunday School Treasurer. She recently became an honorary member of the LWML to which she was very proud to be recognized.
One of her favorite past times was gardening. She also enjoyed conversing with people about politics and when issues became concerning to her, she would be sure that her congressmen and senators received letters on her behalf. Listening to talk radio and keeping up on the latest news was something she always did. As she grew older, her grandchildren and great-grandchildren also became a priority as she’d spend hours sitting in the farm yard watching the children play or work in the yard or attending events that the grandkids were participating in.
Charlotte is survived by her three children, Paulette Hodgson, Jacksonville, FL, Dwight (Nancy) Henke, and David (Roslyn Jean) Henke, both of Hannover; five grandchildren, Jennifer (Anthony) Dennis, Jacksonville, FL, Travis (Tricia) Henke, Mountain Home, ID, Melissa (DJ) Hatlestad, Mandan, Thomas (Angela) Henke, Dickinson, and Kathryn Henke, Hannover; ten great grandchildren; one sister, Harriet Meyhoff, Bismarck; one sister-in-law, Marion Reinke, NV; and one brother-in-law, Clarence Henke, New Salem.
Charlotte was preceded in death by her husband, Nelvin in April 2012; her parents; one brother, Frederick Kuch; six brothers-in-law; four sisters-in-law; and a great grandchild, Morgan Henke.
In lieu of flowers the family prefers memorials to the Center Ambulance Service.
To order memorial trees or send flowers to the family in memory of Charlotte Henke, please visit our flower store.