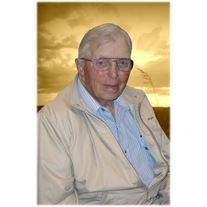 Charles “Chuck” Maier, 87, of New Salem, died April 10, 2011 at Medcenter One Hospital in Bismarck. Funeral services will be held at 2:00 PM Friday, April 15, 2011 at the Peace Church in New Salem with the Reverend Joshua Eddy officiating. Burial will be in the church cemetery at a later date. Visitation will be from 5:00 to 8:00 PM Thursday at the Buehler-Larson Funeral Home Chapel in New Salem where a prayer service will begin at 7:00 PM. Visitation will continue one hour prior to the service at the church on Friday.
Charles was born on October 26, 1923 in Mandan, the son of William and Anna (Jacobsen) Maier. Chuck was raised on the Oliver County farm, northwest of New Salem that was homesteaded by his grandfather. He attended rural schools and graduated from New Salem High school in 1941. Chuck married Gloria Schmidt on September 3, 1950 and brought her home to the ranch where they would spend their married life.
A true steward of the land and the animals in his care, he loved being outdoors with the cattle and the sheep. Chuck was also a very accomplished horseman. He and Gloria also raised turkeys. When he wasn’t working on the ranch, he enjoyed reading, especially magazines covering current events.
He was a member of the New Salem Saddle Club and the New Salem Rodeo Association. Chuck served as the secretary/treasurer for the New Salem Weigh Station for many years and had been a member of the Peace Church Council. He served on the Morton County Fair Board and was the Sheep Superintendent. Chuck was also the winner of the Oliver County Conservation Award and served as a 4-H Leader for Oliver County. In addition to farming/ranching, Chuck worked as a crop insurance adjuster for many years and was a field man for the ASCS of Oliver County.
Chuck is survived by his wife, Gloria of New Salem; his daughter, Marie (David) Wolsky of Cando; his sons, Greg (Diane) Maier of New Salem and Loren (Renee) Maier of St. Peter, Minnesota; his grandchildren, Melanie (Allen) Nilles, James (Monique) Franciere, Amy (Jaread) Miller, Lacey Maier, Katie Wolsky (fiancée, Devin), and Bobby Wolsky, and Pace and Karly Maier; and great-grandchildren, Sydney, Lexie, Kolter and Matthew.
He was preceded in death by his parents; two grandchildren, Katie Jo Maier and Matthew Franciere; his sister, Emma Kraig; and his brothers, Walter, Herman, and Clarence Maier.
To order memorial trees or send flowers to the family in memory of Charles Maier, please visit our flower store.