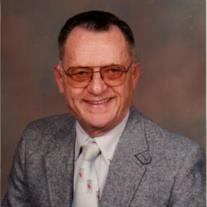 A funeral service will be held at 10:30 am on Saturday, January 23, 2016 at First Baptist Church, Mandan, with Reverend Allen Thomason officiating. Burial will be at Mandan Union Cemetery.

A Prayer Service and time of sharing will be held at 7 pm on Friday, January 22, 2016 at Buehler-Larson Funeral Home, Mandan.

Charlie was born May 29, 1928 in Dubuque, Iowa to Charles Sr. and Marcella (Pins) Howes. Hard working from a young age, he worked odd jobs and helped out wherever he could. Charlie attended high school and then worked in the parts department for a Pontiac dealer and also drove stock car for 2 years. He was also a carpenter for several years. On August 1, 1953 Charlie married Dolores Love in Dubuque. In 1954 they moved to Mandan where he was employed by the Amoco Refinery for 35 years. Following his retirement in 1989 they did a lot of traveling to visit family, friends, and new places. He later worked part time at Dan’s Super Value and the ND Experiment Station. In his free time Charlie enjoyed hunting, fishing, camping, and spending time with his family. He was a talented taxidermist. A member of First Baptist Church in Mandan, Charlie enjoyed doing church maintenance and helping whoever he could. Dolores died in September 2000 from Alzheimer’s. He had cared for her at home for 4 years and then she spent 8 years in the Mandan Care Center.

Blessed to have shared his life are two daughters, Susan (Ken) Weigel and Sally (Ty) Young, both of Bismarck; one son, Steven (Ginger) Howes, Livingston, MT; 8 grandchildren; and 21 great grandchildren.

Charlie was preceded in death by his parents; his two brothers, Paul and Maurice; and his wife, Dolores.
To order memorial trees or send flowers to the family in memory of Charles Howes, please visit our flower store.