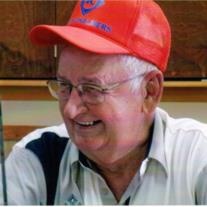 A funeral service will be held at 11 am on Tuesday, July 26, 2016 at First Lutheran Church, Mandan, with Reverend Lee Herberg officiating. Burial will be at the North Dakota Veterans Cemetery with full military honors.

Visitation will be held from 6 to 8 pm on Monday, July 25, 2016 at Buehler-Larson Funeral Home, Mandan, with a prayer service at 7 pm. Visitation will continue one hour prior to the service at the church on Tuesday.

Charles "Chuck" Bahm was born on June 19, 1936 to Henry and Hulda (Amundson) Bahm and grew up on a farm north of Flasher, ND. He served in the Air Force where he met and married Ione Wagner in 1952. After his service, Chuck worked at Deichert Chevrolet as a salesman and then manager of Twin City Implement in Mandan, now Titan Equipment. In 1969, Chuck and Ione opened Chuck's Farm Equipment and raised their three children Robert, James and Rebecca in New Salem.

Chuck always loved farming and started his own farm southeast of New Salem in 1972 and moved from town to the farm in 1991. Their son James and family joined them in 1998 and continue to farm. Chuck and Ione were recognized in 2001 with the Outstanding Agriculturist Award for Morton County at NDSU's Harvest Bowl.

Chuck was a member of First Lutheran Church, Mandan Rural Fire Department, Elks, Eagles and Lions as well as Scoutmaster and volunteer for New Salem fire and ambulance crews. He served as County Representative of the ND Wheat Commission & County Crop Improvement. He enjoyed collecting Allis-Chalmers tractors, playing cards, hunting, fishing, camping all over the U.S. and especially wintering in AZ.

Chuck is survived by his special friend Marlys Berg; his children Robert (Valerie) of Minot and their sons Tyler (Lisa) and daughters Harper and Kendri and Zachary (Ashley) and sons Conway and Cohen; Jim (Labeth) of New Salem and their children Justin, Matthew, Michael, Brittney and her children Jessica, Hanna and Corey; Rebecca (Brian) Benz of Minneapolis and their sons Evan and Logan; brother Willard (Donna) Bahm; sister Jean (Joe) Urness and sister Sharon Johnson all from Mandan, ND and sister-in-law Arlene Bahm of Shields, ND and many cousins, nieces and nephews. He was preceded in death by his loving wife, Ione, of 53 years; his parents, brother Glen and sister Faye.
To order memorial trees or send flowers to the family in memory of Charles Bahm, please visit our flower store.