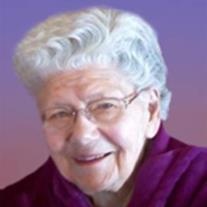 A funeral service will be held at 2 pm on Friday, February 13, 2015 at Peace Church, New Salem, with Reverend Joshua Eddy officiating. Burial will be at Peace Cemetery.

Visitation will be held from 2 to 3 pm on Thursday, February 12 at Elm Crest Manor in New Salem and from 3:30 to 7 pm at Peace Church with a prayer service at 7 pm. Visitation will continue one hour prior to the service at the church on Friday.

Carol was born December 4, 1924 in New Salem to William and Erna (Lueder) Westermann. Graduating from New Salem High School in 1943, she then traveled to the west coast and worked as a welder’s assistant during WWII. After a short time in Washington she returned to ND and went through nurses training at the Bismarck Hospital, graduating in 1946. Carol joined the Cadet Nurse Corp during her training and upon graduation worked for a few months at the Crippled Children’s School in Jamestown. Several nurses were heading to Seattle and Carol joined them, working at West Seattle Hospital and Bremerton Hospital. She worked there until the summer of 1947 when she returned to New Salem and married Raymond Schwarting on August 10. They moved to Fargo and she worked at St. Luke’s Hospital and for Public Health. Ray finished his business course in Fargo and they moved to Bismarck. Carol worked at Bismarck Evangelical Hospital, now Sanford. In 1948 Ray and Carol moved to the Schwarting farm north of New Salem. Their son, Steven, was born while they lived on the farm. Moving into New Salem in 1958, Carol gave allergy shots to many people at their request. She and another nurse formed the Nurses Club in New Salem with about 10 members. Carol was very active in Peace Church, teaching high school Sunday school for more than 20 years, and was a pianist for Women’s Guild for over 50 years. She maintained a very close relationship with many nursing classmates throughout her life. Carol and Ray made many trips to Washington and Oregon, visiting former nurse classmates, her brother Waldon and family, and other relatives. In earlier years, a lot of time was spent boating and water skiing with family. A kind and giving woman who loved to help others, Carol will be missed by those who knew and loved her.

Carol was preceded in death by her parents; her husband, Ray, in 2008; brother, Duane Westermann; brothers and sisters-in-law, LeRoy and Marie Schwarting and Nora and Erwin Klusmann; and nephews, Clark Schwarting and Wesley Westermann.
To order memorial trees or send flowers to the family in memory of Carol Schwarting, please visit our flower store.