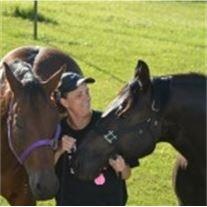 Carla Anderson, 52, Center, died unexpectedly on July 23, 2013 at Sanford Health, Bismarck, after a month long illness.
Carla was born on September 15, 1960 in Bismarck to Don and Cecelia (Staigle) Albers. She grew up in Center where she graduated from High School in 1978. She really enjoyed her school years as a wrestling Cheerleader and playing Varsity basketball.
On July 15, 1978, Carla married the love of her life, Tracy Anderson. They made their home in Center and had three sons, Brandon, Alex, and Andrew. They also enjoyed working together in their business, Anderson Custom Cabinets Shop.
Carla began her medical career at Square Butte Health Clinic, now Coal County Health Clinic and was later transferred to the Medcenter Hospital with duties managing its rural clinics, recruitment, and wrote a grant to establish Telemedicine. Her work with the telemedicine and pioneering work for the Veterans Administration received state and national recognition and honors.
In 2002, Carla expanded her reach into the telecommunications industry. She worked for the Bismarck-based mobile communications company Extend America and joined e-Copernicus, a telecommunications and public safety consulting firm based in Washington, D.C. Carla most recently served as the Deputy Executive Director of the NG (Next Generation) 9-1-1 Institute, a not-for-profit organization that supports the mission of the Congressional NexGen 9-1-1 Caucus to advance 9-1-1 services nationally. Carla’s efforts to promote 9-1-1 education are without parallel and she played an important role in the passage and enactment of some of the most important pieces of legislation passed by the U.S. Congress to advance 9-1-1 over the past 10 years.
A native of Center, Carla never lost her love for her home town and her rural ND roots. She is well known for her positive attitude, boundless energy and support for many local causes, including the schools, church, and clinic. With her love of photography she even volunteered to be the local newspaper photographer. You could find her at every function in town helping, organizing, and cheering on the community. When not with the community or at work, you could find Carla at home tending to her family, yard, and horses.
Carla will be deeply missed by her husband, Tracy; sons, Brandon and Andrew; parents, Don and Cecelia Albers; sister, Karen (Paul) Thomas; brothers, Kurt (Ursula) Albers, Scott (Tracey) Albers, and Jeff (Karen) Albers; nieces, Madison, Alexis, Ashley, and Jurney; nephews, Jonathan, and Michael; Sisters-in-law, Vicki Anderson, Nancy (Wayne) Bell, Susan Anderson, Becky (Wally) Keller, Jessica (Emerson) Judkins. Brothers-in-law Kerry Anderson, Terry Anderson, Wade Anderson, Charlie (Janet) Anderson, Scott (Lisa) Anderson and numerous nieces and nephews.
Carla was preceded in death by her son, Alex; father and mother in-law, Andy & Shirley Anderson; brother-in-law, Marty Anderson; nephew, Christopher Keller; Uncles, Gordon Albers and Ramon Furo; one aunt, Joyce Rolfe; and special grandmother, Frances Staigle
To order memorial trees or send flowers to the family in memory of Carla Anderson, please visit our flower store.