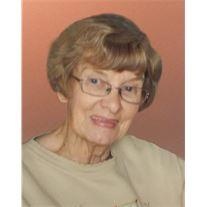 Betty Starck, 77, New Salem, died from injuries sustained in a single car automobile accident on June 4, 2014.
A funeral service will be held at 10:30 am on Monday, June 9 at Peace Church, New Salem, with Reverend Joshua Eddy officiating. Burial will be at Peace Cemetery.
Visitation will be held from 5 to 7 pm on Sunday, June 8 at Peace Church with a prayer service at 7 pm. Visitation will continue one hour prior to the service at the church on Monday.
Betty Lorraine Kuehn was born January 27, 1937 to Carl and Martha (Harmel) Kuehn in Richardton, ND. She and her four siblings grew up in Hebron, ND. In the fall of 1944, the family moved to a ranch west of Washburn, ND along the Missouri River. There, her father raised Herford cattle in a large feedlot operation. She attended a small country school through the eighth grade and graduated from Riverdale High School in 1956. She was confirmed in the Berka Country Church where her family attended. Upon graduation, Betty served as a missionary for the Lutheran Church. Following her work for the church, she attended Minot College where she received a teaching degree. She was started her teaching career in Halliday, ND at the Twin Buttes School. In 1962, she continued her teaching journey by moving to New Salem where she met the love of her life, Lynn Starck. They were married on June 25, 1964 at Peace Church. Betty continued to teach until 1968 when Darin, their first son, was born. In 1971, they welcomed a second son, Mark. Once Mark graduated, she continued her work with children by being a nanny in their rural neighborhood nineteen miles southeast of New Salem where she lived until her death. She was an active member of Peace Church and their Women’s Guild. She was an avid gardener, but the true light of her life was her two boys, her grandchildren, and great granddaughter.
Blessed to share almost 50 years was her husband, Lynn Starck, New Salem; two sons, Darin (Donna) Starck, Mandan and Mark (Robin) Starck, Bismarck; four grandchildren, Brad (Katelyn) Starck, Tioga, Nicole (Seb) Jacobs, Solen, and Haley and Wyatt Starck, Bismarck; one great granddaughter, Bailey Jacobs; one sister, Beverly (Byron) Zingg, McClusky; sister-in-laws, Eloise Kuehn, MN, Diane (Dan) Abraham, CO, Lavonne Starck, CO, and Betty Fett, Fargo; many nieces, nephews, and countless friends.
Betty was preceded in death by her parents; her step mother, Esther Kuehn; two brothers, Melvin and Donald; one sister, Elaine; and sister-in-law, Carolyn Kuehn.
To order memorial trees or send flowers to the family in memory of Betty Starck, please visit our flower store.