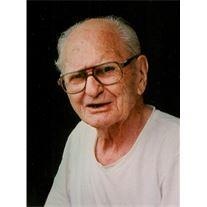 Bernie Wieland, 92, Mandan, died April 28, 2014 at Sanford on Sunset Care Center, Mandan.
Graveside services will be held at 1:00 pm on Friday, May 2, 2014 at the North Dakota Veterans Cemetery with military honors.
Bernie was born June 12, 1921 in Streeter, ND to John and Elizabeth (Freuer) Wieland. He graduated from Tappen High School in 1940. On November 6, 1942 he married Irene Olson in Kensal, ND. One month later Bernie entered the US Army Air Corps and was based in San Francisco, CA and served as a radio operator. He was honorably discharged in December 1945. Bernie and Irene made their home in Mandan in 1952 where he worked for Western Auto Parts for many years and for OK Equipment, retiring in the early 80’s. He loved bowling and was a part of the American Legion bowling team. Bernie was a lifetime member of the Mandan American Legion and a member of the Mandan Eagles and Moose Lodges. He thoroughly enjoyed the work he did and friends he made as a volunteer for Golden Age Services, volunteering into his 80’s.
Blessed to have shared his life are three daughters, Dianne (Gordon) Vogt, Silver Springs, NV, Sandi Johnson, Clarkdale, AZ, and Barb Wieland, Mandan; one son, Jerry (Shelly) Wieland, Mandan; four grandchildren, Randy Wieland, Eric (Maria) Maddox, Chris (Bess) Miller, and Sheri Miller; one great granddaughter; one sister, Renata Churchill, Redmond, WA; and three brothers, Leo (Carol) Wieland, Pinellas Park, FL, Elmer Wieland, Park Rapids, MN, and Leonard (Cindy) Wieland, Falmouth, ME.
Bernie was preceded in death by his parents; his wife in 2004; son-in-law, Mark Johnson; two sisters, Leah (Rich) Falk and Leone (Howard) Haase; and one brother, Gerhardt Wieland.
To order memorial trees or send flowers to the family in memory of Bernie Wieland, please visit our flower store.