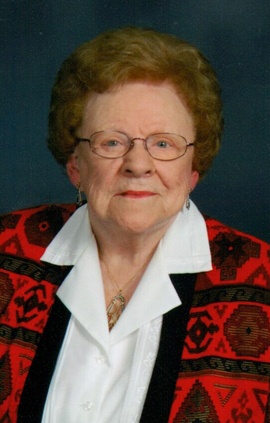 Beatrice was born October 11, 1923 in Bismarck to Henry and Marie (Bethman) Beckman. She grew up on a farm north of Hannover. Beatrice attended school in Center, graduating from Center High School in 1942. She taught country school for a few years. On November 26, 1944 she married Walter Reinke at St. Paul Lutheran parsonage in Center. They lived on the family farm and raised their three children. In December 1972 they moved into Center. Beatrice taught Sunday school for many years, was the treasurer for St. Paul’s, and belonged to the Ladies Aid. She enjoyed sewing and making clothes for her family. Beatrice enjoyed her travels, especially two trips to England and many places around the U.S. She even walked across the Golden Gate Bridge. Beatrice was an avid fan of the Minnesota Twins and the Denver Broncos. She watched them on television whenever she could.

Memorials are preferred to the Center Ambulance service.

Beatrice's Memorial Folder
To order memorial trees or send flowers to the family in memory of Beatrice Reinke, please visit our flower store.