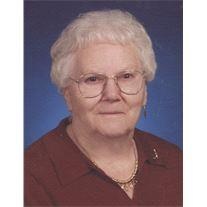 Beata Haag, 94, Center, died July 23, 2012 at St. Alexius Medical Center, Bismarck.
Mass of Christian burial will be held at 11:00 am on Friday, July 27, 2012 at St. Martin Catholic Church, Center, with Reverend Selva Periannan celebrating. Burial will take place at a later date at St. Martin Cemetery, Center.
Visitation will be held from 1:30 to 2:30 pm on Thursday, July 26 at Elm Crest Manor, New Salem and continue from 4 to 8 pm at St. Martin Church, Center, with a Parish Rosary Vigil at 7 pm. Visitation will continue one hour prior to the service at the church on Friday.
Beata was born June 16, 1918 near Yucca, ND to John and Barbara (Barnhardt) Hatzenbihler. She was raised and educated in the Center area and on November 8, 1943 she married John Haag. Together they farmed near Center until John’s passing on May 3, 2003. Beata moved into Center in 2004 where she lived until entering Elm Crest Manor in New Salem in November 2010.
Beata was a lifelong member of St. Martin Church and a longtime member of the Merry Mixers Homemakers. She loved working on her crafts, visiting with family and friends, and was always ready for a game of cards or dominos.
This wonderful and loving woman will be missed by her two daughters and sons-in-law, Vivian (Keith) Dahl and Marlene (Steve) Fricke, all of Center; four sons and daughters-in-law, Thomas (Sharon) Haag and Donald (Arlene) Haag, all of Center, Dale (Susan) Haag, New Salem, and Conrad (Melva) Haag, Center; 20 grandchildren; 23 great grandchildren; one sister, Elizabeth Haag, Center; two brothers, Ralph (Louise) Hatzenbihler, Mandan and Monsadius Hatzenbihler, Bismarck; and two sisters-in-law and one brother-in-law, Barbara Hatzenbihler, Wenatchee, WA and Edward (Thelma) Haag, Great Falls, MT.
Beata was preceded in death by her husband, John; her parents; one grandson, David Haag; five brothers and four sisters-in-law, Matt (Adeline), Jack (Magdalyn), John, Pete (Betty), and Frank (Darlene); two sisters and brothers-in-law, Rose (Bill) Jahner and Mary (Martin) Emineth.
To order memorial trees or send flowers to the family in memory of Beata Haag, please visit our flower store.