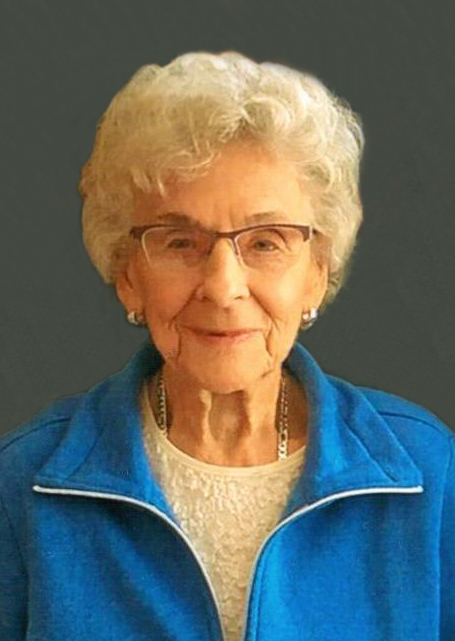 Audrey Henke, 88, Hannover, died on July 10 th 2018.  She was busy that day, cooking supper for the family and watering her flowers, when Jesus called her home.

Public visitation will be Sunday, July 15 th from 2-4 pm at Elm Crest Manor in New Salem.  The funeral service will be held at 11:00 am on Monday, July 16 th , at St. Peter Lutheran Church in Hannover, with burial at the Hannover Cemetery.

Our mother was living the life she wanted!  At 88, she was living in her home that she and dad had designed and built, driving her car, singing in the church and community choirs, attending every community or social event in Oliver and Morton counties that her calendar allowed, and volunteering at Elm Crest Manor.

Audrey Lorraine was born on May 11, 1930, to Oscar and Mimi (Nyquist) Hoger.  She grew up on the Hoger Homestead, north of Judson, and graduated from New Salem High School.

When our parents married on June 16, 1949, and moved onto the Henke homestead, they had very little.  Mom had a teacher’s education and taught for one year.  She soon became a farm wife, milking cows, raising five kids, raising chickens, (she hated chickens) gardening, driving tractor, and still managing to cook three meals a day and keep the cookie jar full.

We know we had the best mom and grandma, but no words can fully convey the positive influence that this little lady, who loved the Lord, had on so many people.  She freely gave her time and talents to others her whole life.  She sang the Lord’s Prayer at dozens of weddings, taught Sunday school and VBS, was a Hannover Farmette for 40 plus years, a 4-H leader, and was still an active member of LWML.

Mom had many hobbies, but her passion was the residents and staff of Elm Crest Manor.  For 39 years, she was there 2-3 times a week.  It started by leading devotions.  Soon, she established a card recycling program, then making quilts for the resident’s beds, writing letters to families after a resident’s death, Ombudsman for 34 years, and writing “The Highlights” for the New Salem Journal.  Her Highlights included Elm Crest News, but what she got really excited about was interviewing each new resident and telling their story.  She had the strength, love and faith to sing “Jesus Loves Me” to many residents as they were dying.

She did this “job” so well that she was honored as North Dakota Long Term Care Association’s Volunteer of the Year in 1996 and again in 2008.  She also was named North Dakota’s Outstanding Older Adult and included in the booklet, 50 Fabulous Older People from 50 States .

She was preceded in death by loving husband, Kenneth E. Henke; parents, Oscar and Mimi Hoger; and son-in-law, Ramon Gonzales.

In lieu of flowers, the family prefers memorials to the Hannover Cemetery Fund or Elm Crest Manor Activity Fund.

To order memorial trees or send flowers to the family in memory of Audrey Henke, please visit our flower store.
Open