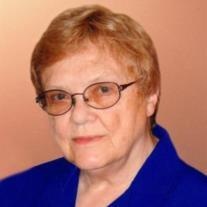 Funeral services will be held at 10:30 am on Monday, January 26, 2015 at Zion Lutheran Church, New Salem, with Reverend Russell Fitch officiating. Visitation will be held one hour prior to the service at the church. Burial will be at Graceland / Zion Cemetery in New Salem.

Audrey was born February 17, 1936 in New Salem to Albert and Mathilda (Vollrath) Krueger. She was raised in New Salem and graduated from New Salem High School in 1954. Audrey met Calvin Bauer while she was employed by the ND State Highway Department in Bismarck. Calvin and Audrey were married on August 26, 1956 at Zion Lutheran Church in New Salem. They had three children, Vicky, Verdean, and Kevin.

Audrey was a lifelong resident of New Salem and lived her adult life adjacent to her childhood home. After raising her children, Audrey pursued her love of art by attending local art classes and practiced her craft up until the time of her death. She was a member of Gallery 522 in Bismarck and won numerous awards for her paintings. Audrey also shared her gift of music by playing piano for residents of Elm Crest Manor and members of Zion Lutheran Church.

Surviving Audrey is her husband, Calvin Bauer, New Salem; a son, Kevin (Holly) Bauer, Moorhead, MN; granddaughter, Joelle, whom Audrey called “My Sweetie”; and a brother, Derwood (Nancy) Krueger, Anderson, CA. She will also be missed by her extended family and friends.

Audrey was preceded in death and welcomed into Heaven by her parents; her brothers, Elwood, Clinton, and Clayton Krueger; and two daughters, Vicky and Verdean.
To order memorial trees or send flowers to the family in memory of Audrey Bauer, please visit our flower store.