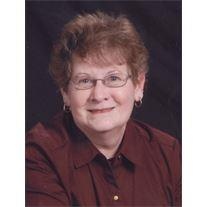 Arly (Arlene) P. Haag, 65, passed away on January 20, 2014 in her home surrounded by family.
Mass of Christian burial will be held at 10:30 AM on Friday, January 24, 2014 at St. Martin’s Catholic Church, Center, ND. Visitation will be from 6 to 7 PM on Thursday at St. Martins with a prayer service at 7 PM.
Arly was born February 19, 1948 in Bismarck to Felix and Katie (Gross) Silbernagel. She married Donald Haag on August 22, 1966 at St. Mary’s Catholic Church in Bismarck. Arly was a 1966 St. Mary’s High School Graduate. While raising her 4 children, she received a Bachelors degree in Teaching from University of Mary. Arly had many talents. She was an artist, a teacher, and a gardener. She had many hobbies that included hand embroidery, quilting, knitting, and crocheting. She had a great appreciation and love for nature. During her working career she was a teacher/librarian at Almont Elementary and a Park Ranger for Knife River Indian Village.
Arly’s faith and family were of the utmost importance to her. Family gatherings were always a time of excitement and joy. As a survivor of Polio she had amazing strength and belief in our Lord.
Arly is survived by her husband, Donald Haag; sons, Dan (Denise) Haag and Nick (Kari) Haag; daughter, Dawn (Boudie) Schneider; grandchildren, Alex (DelRae) Haag, Ashlee Haag, Blake Haag, Emily Haag, Savannah Schneider, and Wyatt Schneider; great grandson, Isaiah Haag; brothers, Eddie (Tillie) Silbernagel, Leo (Darlene) Silbernagel, and Robert (Cathy) Silbernagel; sisters, Eugenia (Leo) Roehrich, Maggie Krumm, Lena (Chris) Gehring, Valerie Saffel, and Joey (Mark) Erhardt; brother and sister-in-laws, Tom (Sharon) Haag, Dale (Sue) Haag, Vivian (Keith) Dahl, Conrad (Melva) Haag, and Marlene (Steve) Fricke. She was loved by many nieces and nephews and will be greatly missed by all.
Arly is preceded in death by her son, David Haag; her parents, Katie and Felix Silbernagel; mother and father-in-law, Beta and John Haag; sister and brother-in-laws, Ann and Carl Roehrich, Mary and Carl Lineer, and Lil and John Vetter, Mike Saffel, and Tony Krumm.
In lieu of flowers the family would like memorials donated to the American Cancer Society or St. Martin’s Catholic Church.
To order memorial trees or send flowers to the family in memory of Arly Haag, please visit our flower store.