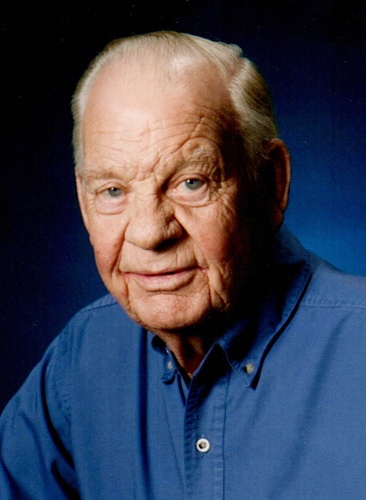 Arlow Nelson, 92, of Mandan, passed away on Tuesday, November 26, 2019 at Sanford Health in Bismarck.

A funeral service will be held at 2:00 PM on Tuesday, December 3, 2019 at Buehler-Larson Funeral Home in Mandan with Rev. Gene Anderson officiating. Burial will follow at Mandan Union Cemetery.  The family will greet friends at the funeral home from 12:30 pm until the time of service on Tuesday.

Arlow was born on August 4, 1927 in Forman, ND to Charles and Amelia (Lebakken) Nelson. He was raised on the family farm and attended grade school at Rutland Consolidated. After his schooling, Arlow served in the United States Army from 1946-1947 where he was stationed at Fort Myer in Virginia. On June 23, 1951 he married the love of his life, Mary Prim, in Flaxton, ND.

Arlow loved pitching horseshoes and won many tournaments, including the World Horseshoe Tournament in his class in Bismarck in 2000. Arlow and a couple Horseshoe buddies oversaw the proper construction of the Horseshoe courts at Sertoma Park in Bismarck. After the construction, Arlow proudly spent time maintaining these courts. He was also an accomplished bowler, winning the Bis-Man City Tournament in 1981. Arlow has many other hobbies which included playing various card games (Pinochle, Gin Rummy, and especially Cribbage), shooting pool, and he was also a talented singer and guitar player.

Arlow was a proud and meticulous man. He upheld the Nelson family value of “here’s the work - get it done.” Arlow was never one to sit still and was fiercely independent, living alone and taking care of himself, home, and yard. He had a “fixer” attitude and found a way to adapt and overcome any obstacles he faced. Arlow and his beloved Mary loved to spend many hours waltzing around the dance floor. Arlow loved all sports but was especially a devoted Twins fan. Arlow had a witty sense of humor that his family and friends enjoyed. The light of Arlow’s spirit will continue to guide our paths and be reflected in generations to come.

He was preceded in death by his parents, Charles and Amelia; his wife, Mary; sisters, Edna Sandness, Laura Brown, and Doris Nelson; brothers, Alvin, Raymond, Norman, Marvin, Lawrence, and Melford.

To order memorial trees or send flowers to the family in memory of Arlow Nelson, please visit our flower store.
Open