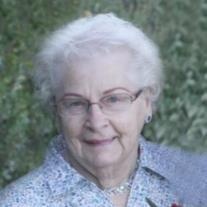 Mass of Christian burial will be held at 2 pm CT on Tuesday, November 4, 2014 at St. Mary Queen of Peace Church, Almont, with Fr. Selva Periannan celebrating. Burial will be at the Almont Cemetery following the Mass.

Visitation will be held from 6 to 8 pm CT on Monday, November 3, 2014 at St. Mary Queen of Peace Church, Almont, with a Rosary at 7 pm CT. Visitation will continue one hour prior to the service at the church on Tuesday.

Arlene was born in Elbowoods, ND on January 10, 1935 to John and Frances (Gonringer) Voigt. The third of eight children, she helped raise her younger siblings. Arlene attended Elbowoods Grade School through the eighth grade and Sacred Heart Academy in Minot, graduating in 1953. She attended Dickinson State College and received her teaching certificate. Following her graduation, she asked her mother if she could return home for one year to spend more time with her family. On August 28, 1954 she married Ed Jacobson at St. Gertrude’s in Raleigh, ND. They met while Ed helped her family herd cattle from Elbowoods to their ranch on the Cannonball River near Raleigh, when the Voigt family was uprooted due to the construction of the Garrison Dam. Ed and Arlene lived near McIntosh, SD for five years where she taught school for one year. In 1960 they moved to the Sig Peterson ranch north of Almont, where she resided until her death. Arlene was a compassionate, kind, and gentle wife and mother. Very strong and patient, she raised seven sons and helped raise her grandchildren. Arlene enjoyed music, playing the piano, and was an avid Wheel of Fortune fan. A faithful and dedicated Catholic, she was an active member of St. Mary Queen of Peace Church in Almont and the Christian Mothers. Arlene enjoyed striking up a conversation wherever she would go and was a great hostess, always offering food, drink, and fellowship when visitors came to her home. She enjoyed visiting her sister, Sister Frances, at the Abbey in Valley City. Following Ed’s death in May 2012, Arlene enjoyed the food and company at the Almont Senior Center. She was often the first one there and the last one to leave. A truly wonderful woman, Arlene was loved dearly by her family and friends.

Arlene was preceded in death by her parents; her husband, Ed; infant son, Andrew and daughter, Debra Alice both in 1966; brothers, Bernard and David; and sister-in-law, Alma Voigt.
To order memorial trees or send flowers to the family in memory of Arlene Jacobson, please visit our flower store.