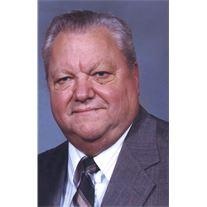 Antone C. “Tony” Goetz, 87, New Salem, was called home by his creator on July 17, 2013.
Mass of Christian Burial will be held at 10:00 AM on Monday, July 22, 2013 at St. Pius V Catholic Church, New Salem, with Fr. Selva Periannan celebrating.
Visitation will be held at St. Pius from 6:00 PM to 8:00 PM on Sunday, July 21, with a Rosary Service at 7:00 PM. Visitation will continue one hour prior to the service at the church on Monday.
Tony was born on February 3, 1926 in Anamoose, North Dakota to Karl and Magdalena (Kantak) Goetz. He was raised on the family farm and graduated from Anamoose High School in 1944. Tony was a gifted accordion player. While he was in high school, Tony and his band the Royal Guardsmen played countless barn dances between Anamoose and Rugby.
Tony enlisted in the U.S. Army in 1945 and was honorably discharged with the rank of Sergeant in 1947. He attended the University of St. Thomas graduating with BA in Accounting in 1951. After graduation he went to work as a field man for International Harvester and set several sales records in North Dakota. Subsequently he purchased beverage distributorships in Bismarck and Williston selling Miller High Life, Pabst Blue Ribbon, Canada Dry, and many other products. In 1961 he went to work for the State Department of Financial Institutions as a bank examiner. In 1964 he purchased an interest in the Security State Bank of New Salem and became its President, a position he held until his retirement in 1993. In 1973 he acquired controlling ownership of the bank, and in 1980 cofounded the State Bank of Oliver County in Center. Today, these banks are known as Security First Bank of North Dakota.
Tony also successfully farmed and ranched near New Salem and was involved in other ventures in the New Salem area. He was an agent and partner in the Security Insurance Agency, was a co-owner of the Golden West Shopping Center with his sons, and owned and operated the Golden Nugget Saloon.
Tony was a dedicated supporter of the Community of New Salem and supported countless community and business projects. He played a key role in obtaining the initial financing for Elm Crest Manor and was a strong proponent of local economic growth, financing many farmers, ranchers, and local businesses. He was a member of numerous organizations including Lions, VFW, and Elks.
Tony was a deeply religious and generous man. He was a strong supporter of St. Pius V Catholic Church, as well as other Catholic and non-Catholic churches and organizations and was a member of the St. Pius building committee.
Tony loved farming and ranching. He also loved playing his accordion and piano, dancing to old time polkas and waltzes, and he enjoyed traveling.
Tony married Rita W. (Winter) Goetz in 1950 and together they had eight children. In 1991 he married Delores Maier.
He is survived by and will be deeply missed by his first wife, Rita and his second wife, Delores; his brother, Francis; his sons, Jim (Devon) Goetz, Carl (LeAnn) Goetz, Paul (Leslie) Goetz, Don (Sheila) Goetz, David (Darcy) Goetz, and Tony (Megin) Goetz; his daughter, Susan (Tom) Bertram; his grandchildren, Sarah (Tyler) Getzlaff, Chris, Carey, Jennifer and Jeremy Goetz; Katina Larson, LaCosta (Travis) Jons, Beth Goetz, Czesia (Ross) Goetz-Winkler, and Andy Goetz; Jacob and Michael Bertram; Nichole (Keith) Davis and Brett (Yukah) Goetz; Brandon and Brooke Leonard, Brent and Brynna Goetz; his great grandchildren Caiden and Carter Getzlaff, Caitlin and Gage Jons, Ethan Rogers, Isabella Miller, and Cypress Leonard; Delores’ children and grandchildren; and many friends and valued customers.
Tony was preceded in death by his parents; his brother, Julius; his sisters, Marie Hagen, Martha Goetz, and Ann Nockles; and his son, Karl John Goetz.
The family prefers memorials in Tony’s name to St. Pius V Catholic Church in lieu of flowers.
To order memorial trees or send flowers to the family in memory of Antone Goetz, please visit our flower store.