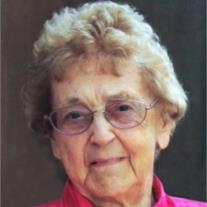 Anna Benjamin of Center, passed away peacefully on May 9, 2016 at Missouri Slope Lutheran Care Center in Bismarck where she had been a resident since October 2014.

Anna Wilhelmina Starck was born December 27, 1915 the daughter of William and Adeline Starck on the family homestead 7 miles east of Center. She attended school at Center Consolidated School. Anna loved growing up on the farm and frequently recalled bringing the cows in for milking on her saddle horse, shocking wheat and taking care of the chickens, turkeys and geese.

Anna married Jesse Benjamin in November 1936 and they made their home in Center where she became very active in community organizations and activities. She loved music, played the piano, clarinet and organ, occasionally serving as an organist at Saint Paul’s Lutheran Church. She also sang in the Church choir and played clarinet in the Center Community Band. She was a life member of the St. Paul’s Lutheran Ladies Aide and also served on the Cemetery Board. Anna was a member of the Center Golden Age Club and worked tirelessly to establish the Center Community bus services, served on election boards and other civic activities.

Anna was very proud of the Center Community and the state of North Dakota. With her husband Jesse serving as the mayor of Center and as an officer in the Star Route Mail Carriers Association, she traveled to other North Dakota cities and several states. While traveling she was very curious about the places she visited and she always spoke with pride about Center her home town and her home State of North Dakota.

In lieu of flowers, the family asks that you consider memorials to Saint Paul’s Lutheran Church/Cemetery Fund.
To order memorial trees or send flowers to the family in memory of Anna Benjamin, please visit our flower store.