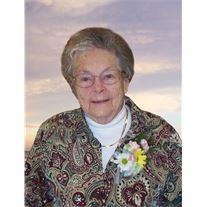 Agnes Ellsworth, 92, Bismarck, formerly of Flasher, died February 29, 2012 at Medcenter One Hospital, Bismarck.
A funeral service will be held at 10:00 am on Tuesday, March 6, 2012 at Buehler-Larson Funeral Home, Mandan, with Major Joseph Wheeler and Major Lee Morrison officiating. Burial will be at Fairhill Cemetery, Flasher, in the spring.
Visitation will be held from 4 to 8 pm on Monday, March 5, 2012 at Buehler-Larson Funeral Home and continue one hour prior to the service at the funeral home on Tuesday.
Agnes was born April 23, 1919 in Valley City, ND to William and Caroline (Skonseng) Lewzader. She graduated from Valley City High School in 1938. Agnes became a commissioned officer in The Salvation Army in 1940 and served for several years as an officer followed by many years as a lay person. On April 28, 1944 she married Eugene Ellsworth in Valley City. Very generous and giving of her time, Agnes was a Farmers Union Youth Leader for 22 years and worked on the Morton County Bookmobile in Flasher for 10 years. She was also a member of the Flasher Homemakers Club for 50 years.
Together Gene and Agnes were devoted to their work with The Salvation Army and in the years since their move to Mandan their mission was ministering to the residents of the Medcenter One Care Center. All of their children and grandchildren have followed in their footsteps and are spreading God's Word through their service in The Salvation Army.
Left with fond memories are two daughters, Major Marie Ellsworth, Bismarck and Major Lois (Joseph) Wheeler, Des Plaines, IL; three grandchildren, Sarah (Christian) DiMaso, Blue Springs, MO, Stephen (Glory) Wheeler, Independence, MO, and Andrew (Corey) Wheeler, Independence, MO; and eight great grandchildren.
Agnes was preceded in death by her husband in 2008; her parents; three sisters; and three brothers.
Memorials are preferred to The Salvation Army or Gideon International.
To order memorial trees or send flowers to the family in memory of Agnes Ellsworth, please visit our flower store.