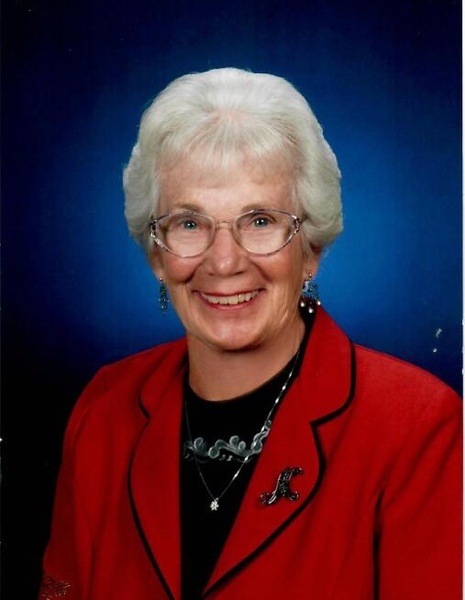 Delight Moum, 89, passed away September 18, 2021, surrounded by her family at the Sanford emergency department.

A Memorial Service will be held at 10:30 AM on Tuesday, October 5, 2021, at First Lutheran Church in Mandan with Rev. Phil Leer officiating.  Burial will be at the North Dakota Veteran's Cemetery at noon.  The family will greet friends one hour prior to the service at the church.

Delight was born August 8,1932, the second child to Eugene and Dagny (Arntzen) Harkins in Fox, Michigan.  She, her older brother, and mother moved to Green Bay, Wisconsin where she attended her first 11 years of school.  Her mother married her stepfather, Arvid Arntzen, and they moved to Escanaba, Michigan for her senior year of high school.

Delight attended nursing school at Northwestern University where she met her future husband, Donald Moum.  They were married on May 16, 1953.  Delight graduated from nursing school and Donald graduated from dental school in 1953.  Their next home was in Junction City, Kansas for 1 year while Donald was in the army.

Following this, Donald was transferred to Germany where Delight and their firstborn, Diane, joined him 5 months later. While in Germany, they had their second child, David.

In 1957, the family returned to Garrison, North Dakota, where Donald practiced dentistry for 9 months.  They then moved to Mandan where they made their home for the next 34 years at which time they retired.  During this time Debra and Daniel were born. They moved to Minnesota for about 11 years and then returned to Bismarck.

Delight was very involved with her children's upbringing, including 12 years of being a Girl Scout leader.  After raising her family, she was a manager at Dental Associates, and spent her free time golfing, bowling, and raising African violets.  Her extreme talent came out when she began rosemaling later in life. She created beautiful artwork and also taught the art for several years.

She leaves behind her husband of 68 years, Donald; children, David (Tami), Debra (Mark), and Daniel; 7 grandchildren; 4 great grandsons and a great granddaughter to be born on October 7th.

She was preceded in death by her daughter, Diane; son-in-law, Arden; two daughters-in-law, Kathy and Elaine; and one grandson, Josh.

To order memorial trees or send flowers to the family in memory of Delight Moum, please visit our flower store.
Open